RiftAmps Frets: 2221
August 2018 edited August 2018 in Made in the UK tFB Trader
This one has been in the pipeline for a while now, the first in my new line of original design amplifiers - each with the aim of capturing something different than what Rift has done in the past.

The Hawker is a 30w 1x12" combo that explores the sonic heritage of old British valve amplifiers that aren't Plexi, such as those from Vox, Selmer, and Watkins. I've always found the idea of men in lab coats tinkering with big-bottle audio circuits quite cool, and the Hawker is a little tribute to those guys who forged ahead with British valve amplification despite the increasing popularity of Fender stuff being imported. There's a definite 'British' tone that those amps all have in common which is very addictive and something I absolutely wanted to capture without the common downsides of low power, too much compression, and questionable clarity.

It's got a pair of cathode-biased KT66s with two power modes, 30w and 8w. A true-bypass buffered series FX loop with level control, a full TMB+Presence tonestack, and a very interactive Gain/Master volume control setup.

The Guitar Magazine review of the Hawker can be found online here - https://www.theguitarmagazine.com/gear/amplifiers/rift-amplification-hawker/
...and they've also filmed a demo video that can be seen here - 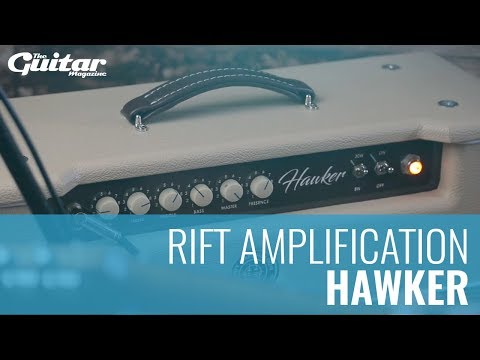