GTC Frets: 111
October 2019 edited October 2019 in Acoustics
I've recently been lucky enough to acquire a left-handed Baden dreadnought guitar for a great price on eBay. I'd never heard of them but I was struck by the simple, unusual lines and did a bit of research.


Baden Guitars was founded by T.J. Baden in 2006. A former vice president of sales and marketing at Taylor, Baden and partner Errol Antzis (a former investment banker and a guitar lover) enlisted European luthiers Andreas Pichler and Ulrich Tueffel to set about redefining the acoustic guitar. Baden guitars were constructed at the Ayers factory in Vietnam. Unlike most imports, and even high-end domestically made guitars, Badens were hand-built from start to finish, with six French master luthiers overseeing the entire operation. Solid woods were used throughout and quality components feature in their narrow model range.

So, I decided to take a risk - and I'm very pleased I did. The guitar plays superbly  and sounds great with solid spruce top and solid ovangkol back and sides. I really like the dreadnought's minimalist and distinctive appearance - although this may not be to everyone's taste. Despite the minimalist approach, the finish and construction displays quality. An added unexpected bonus was the fitted K&K Pure Mini. I would rate the guitar for tone and playability at least as good as any high end jumbo or dreadnought I've played.

Baden had just two models in their range, the D model (which I have) and a cutaway auditorium A model with a limited selection of wood variations. I believe they ceased trading in 2013.

They rarely appear on the used market - but if you ever come across them then they are worth a look. Below is a photo of my D - and a photo of an A for sale in the US (from Reverb).

Has any other forum members had any experience of Baden? 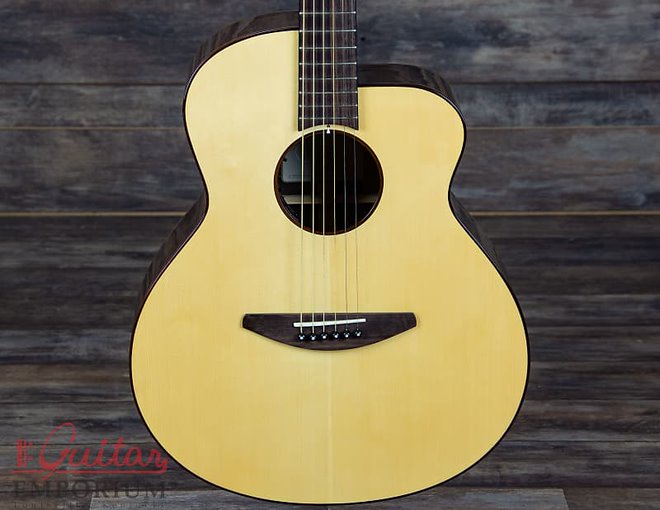